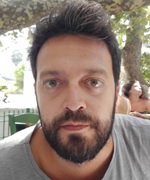 Eleftherios Anastasovitis is a PhD candidate in Applied
Informatics at the University of Macedonia, with a
research subject: “Virtual Antikythera Mechanism: 3D
simulation and representation of its functionalities
in an interactive environment of a serious game”. He
obtained his degree in Informatics from the Aristotle
University of Thessaloniki. He holds an MSc in Cultural Informatics
and Communication from University of the Aegean.
He holds an MEd in Adult Education from the Hellenic Open University.
Since 2016 he is a Research Assistant at the Multimedia Knowledge &
Social Media Analytics Lab of the Information Technologies Institute (ITI),
of the Centre for Research and Technology Hellas (CERTH), participating
in H2020 European projects as well as national, interest-related projects,
such as Virtual Reality, 3D Serious Games, 3D graphics, with major VR
productions of high immersion applications.
More information: http://www.iti.gr/iti/people/Leyteris_Anastasovitis.html